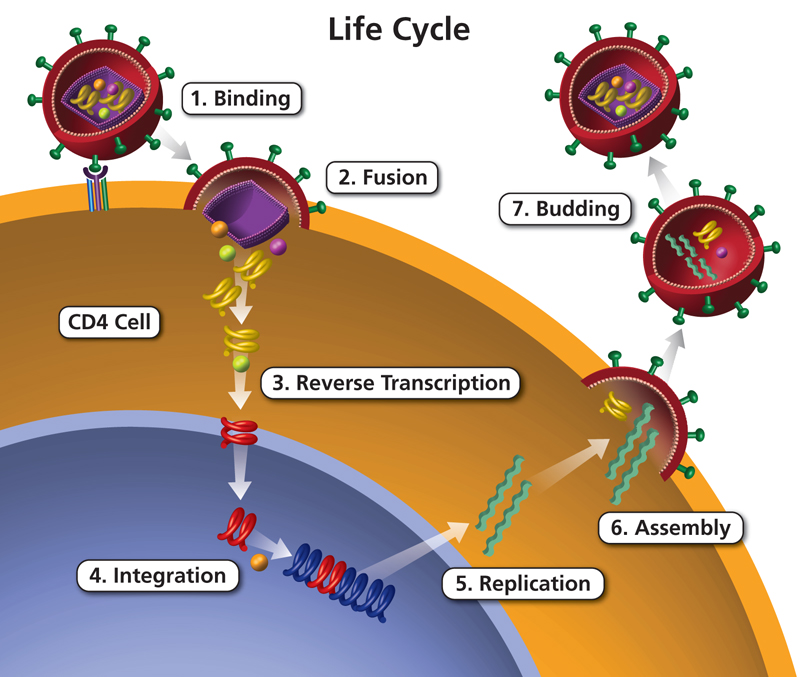 HIV (human immunodeficiency virus) is an infection that affects approximately 1.2 million people in the United States. The infection is very difficult to treat because the virus combines its genetic information with the genetic information of a type of white blood cell called CD4 cells. HIV can continue to replicate without treatment, generating more than 10 billion new viral particles per day.

The replication cycle, or life cycle, of HIV, can be divided into seven stages. Medicines that treat HIV interrupt one of the seven stages of the HIV infection cycle. In an actively infected cell, the entire life cycle lasts only 1 or 2 days. But some cells can be latently infected, meaning that HIV can potentially be present in them for years without producing new virus particles. At any time, these cells can become activated and start producing viruses.

HIV belongs to a group of viruses called retroviruses. These viruses are difficult to get rid of because they integrate with the host cell’s DNA as part of their life cycle. During the first stage of the HIV life cycle, the virus binds to receptors on the surface of CD4 cells. CD4 cells, also called helper T cells, are a type of white blood cell that alert other immune cells that there is an infection in your body. 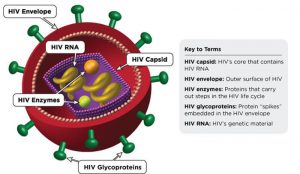 HIV is an enveloped virus, which means that its genetic information is protected by both a protein layer and a lipid layer called the envelope. Once HIV binds to receptors on CD4 cells, it initiates the fusion of its envelope with the CD4 cell membrane using a glycoprotein called GP120. Glycoproteins are molecules made up of carbohydrate and protein chains. Fusion with the membrane of your CD4 cells allows the virus to enter the cell.

Once HIV has converted its RNA to DNA, it releases another enzyme called integrase into the nucleus of your CD4 cell. The virus uses this enzyme to combine its DNA into the DNA of your CD4 cell. At this point, the infection is still considered latent and is difficult to detect even with sensitive laboratory tests.

Because HIV is now embedded in the DNA of your CD4 cells, it can use that cell’s machinery to make viral proteins. During this time, it can also make more of its genetic material (RNA). These two things allow you to create more viral particles.

In the assembly stage, new HIV proteins and RNA are delivered to the edge of the CD4 cell and become immature HIV. These viruses are not infectious in their current form.

During the budding stage, immature viruses break out of their CD4 cell. They then release an enzyme called protease that modifies the proteins of the virus and creates a mature, infectious version.